“There’s something incredibly powerful – revolutionary, even – about challenging someone’s understanding of gender with your very existence.”
—Emily Brehob

According to dominant ideas in “the West”, your gender ultimately reduces to whether you have XX or XY chromosomes, as inferred by inspecting your genitals at birth, and there are only two possibilities: woman or man. Yes, you will hear how sex is biological and gender is social, but under the dominant norms, (specifically chromosomal) sex and gender categories are defined to align.

The existence of transgender (trans) people challenges this chromosomal definition, since their gender differs from male/female sex category assigned at birth. People whose gender is under the non-binary umbrella challenge the man/woman binary since they are neither, both, or fluctuate between the two.

It is tempting for researchers to ignore these complexities since most people are cisgender (cis for short), that is, their gender aligns with their sex category at birth, and they are either a woman or a man. As the male/female demographic tickboxes illustrate, many do ignore the complexity.

A few years ago, analytic philosophers, having for centuries pondered questions such as “what can be known?” and “is reality real?”, discovered that theorising gender offered intellectual challenges too and could be used to support human rights activism. Although plenty of writers have pondered gender, this corner of philosophy offers clear definitions, so is perhaps easier to understand and critique than other approaches. I think it is also more compatible with applied social research.

One of the politically-aware analytical philosophers who caught my eye, Robin Dembroff, recently published a paper analysing what it means to be genderqueer. Let’s sketch out how the analysis goes.

“… the gendeRevolution has begun, and we’re going to win.”

Genderqueer originally referred to all gender outliers – whether cis, trans, or other. Its meaning has shifted to overlap with non-binary gender and trans identities as per the Venn flags below. 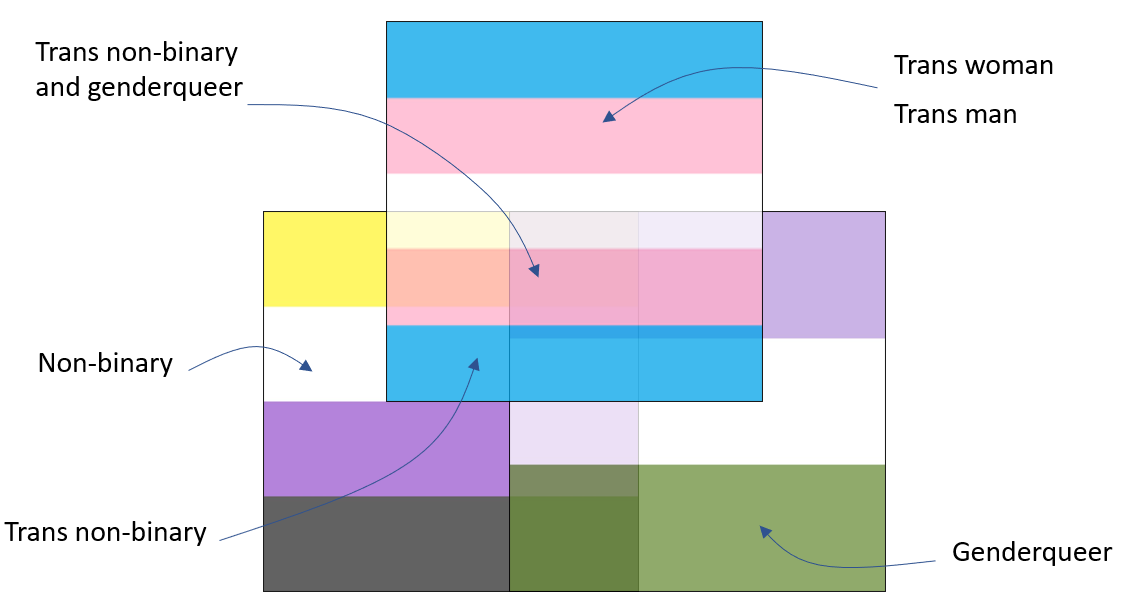 Both genderqueer and non-binary have become umbrella terms with similar meaning; however, genderqueer carries a more radical connotation- especially since it includes the reclaimed slur “queer” – whereas non-binary is more neutral and descriptive, even appearing in HR departments’ IT systems.

The data on how many people are genderqueer thus far is poor – hopefully the 2021 census in England and Wales will improve matters. In the meantime, a 2015 UK convenience sample survey of non-binary people (broadly defined) found that 63% identified as non-binary, 45% as genderqueer, and 65% considered themselves to be trans. The frequency of combinations was not reported.

This year’s international (and also convenience sample) survey of people who are neither men nor women “always, solely and completely” found a small age effect: people over 30 were eight percentage points more likely to identify as genderqueer than younger people.

Dembroff opens with a critique of two broad categories of theories of what gender is: externalist (or social position) theories and internalist (or psychological identity) theories.

Externalist theories define gender in terms of how someone is perceived by others and advantaged or disadvantaged as a result. So, someone would be genderqueer if they are perceived and treated as neither a man nor a woman. However, this doesn’t work for genderqueer people, Dembroff argues, since they tend to reject the idea that particular gender expressions are necessary to be genderqueer; “we don’t owe you androgyny” is a well-known slogan. Also, many cis people do not present neatly as male or female – that does not mean they are genderqueer.

One of the internalist accounts Dembroff considers, the norm-relevancy account by Katherine Jenkins, defines gender in terms of what gender norms someone feels are relevant to them – e.g., how they should dress, behave, what toilets they may use – regardless of whether they actually comply with (or actively resist) those norms. Norm relevancy requires that genderqueer people feel that neither male nor female norms are relevant. This is easiest to see with binary gendered toilets – neither the trouser nor skirt-logoed room is safe for a genderqueer person. However, it is unlikely that none of the norms for men or women would be felt as relevant. So the norm-relevancy account, Dembroff argues, would exclude many genderqueer people too.

Dembroff’s proposed solution combines social and psychological understandings of gender. They introduce the idea of a critical gender kind and offer genderqueer as an example. A kind, in this sense, is roughly a collection of phenomena defined by one or more properties. (For a longer answer, try this on social kinds by Ásta.) Not to be confused with gender-critical feminism.

A gender is a critical gender kind, relative to a given society, if and only if people who are that gender “collectively destabilize one or more core elements of the dominant gender ideology in that society”. The genderqueer kind destabilises the binary assumption that there are only two genders. Dembroff emphasises the collective nature of genderqueer; as a kind it is not reducible to any individual’s characteristics and not every genderqueer person need successfully destabilise the binary norm. An uncritical gender kind is then one which perpetuates dominant norms such as the chromosomal and genital idea of gender outlined above.

Another key ingredient is the distinction between principled and existential destabilising – roughly, whether you are personally oppressed in a society with particular enforced norms. Someone who is happy to support and use all-gender toilets through (principled) solidarity with genderqueer people has a different experience to someone who is genderqueer and feels unsafe in a binary gendered toilet.

In summary, genderqueer people collectively and existentially destabilise the binary norm. Some of the many ways they do this include: using they/them or neopronouns, through gender expression that challenges dominant norms, asserting that they are genderqueer, challenging gender roles in sexual relationships, and switching between male and female coded spaces.

Although Dembroff challenges Jenkins’ norm-relevancy account, to me the general idea of tuning into gender norms is helpful for decoding your gender, and neatly complements Dembroff’s account. Maybe a trick is to add, and view as irrelevant, norms like “your genitals determine your gender” rather than only male and female norms. Additionally, adding probabilities rather than using binary true/false classical logic seems helpful to revise the account too. The externalist accounts are also relevant since they map out some ways that genderqueer people resist binary norms and dominant ways that (especially cis) people perceive and treat others.