The core idea of Katharine Jenkins’ (2018) norm-relevancy account of gender is that someone’s gender is defined in terms of the gender norms they experience as relevant – whether or not they comply with those norms. I’m not sure if this is enough to define gender; however, I think it’s a very interesting theory of how people – especially trans and nonbinary people – might decode their gender. Jenkins uses a crisp classical binary logic approach. This blog post is an attempt to explore what happens if we add probabilities.

I’m using Bayesian networks because they are well-supported by software that does the sums (the analyses below were produced using GeNIe Modeler). The direction of the arrows below is not meant to imply causation. Rather, the idea is from the assumption that someone is a particular gender, it is straightforward to guess the probability that a particular gender norm would be relevant. The Bayes trick then is to go in reverse from experiencing the relevance of particular norms to decoding one’s gender. 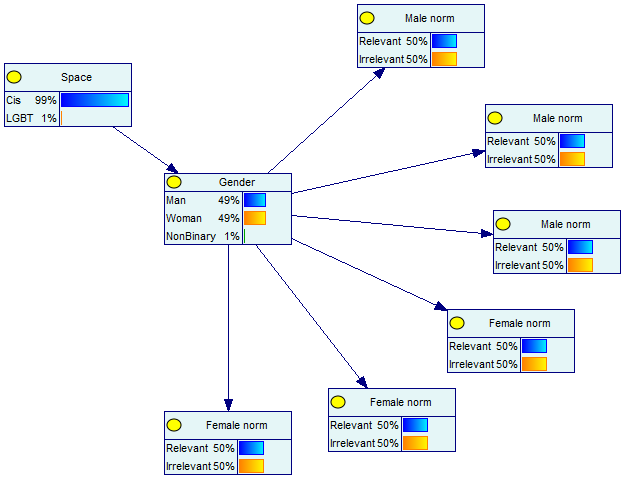 The goal is to infer  gender and at present the probabilities are 49-49% for man/woman and 1% for nonbinary. That’s probably too high for the latter. Also I’m assuming there are only three discrete gender identities, which is false.

The idea then is to the use the Bayesian network to calculate how likely it is that someone is a man, woman, or nonbinary based on the relevance or irrelevance of the norms.

I have not yet mentioned the Spaces node top left. This is a convenient way to change the prior probabilities of each gender; so in LGBT spaces the prior probability for nonbinary raises from 1% to 20% since there are likely to be more nonbinary people around. This also captures the intuition that it’s easier to work out whether a particular identity applies to you if you meet more people who hold that identity. See the picture below. Note how LGBT is now bold and underlined over top left. That means we are conditioning on that, i.e., assuming that it is true. 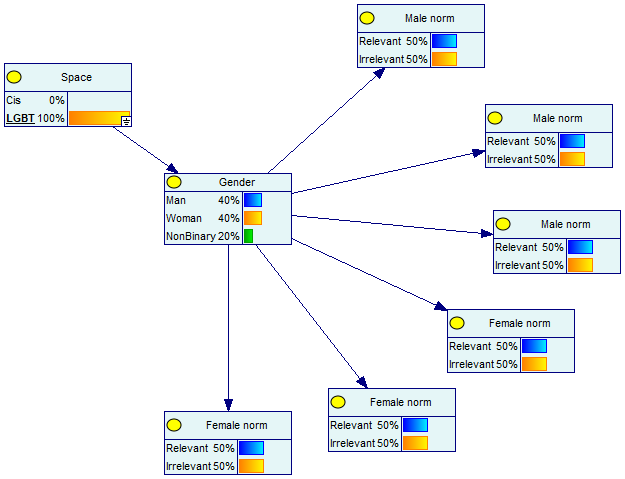 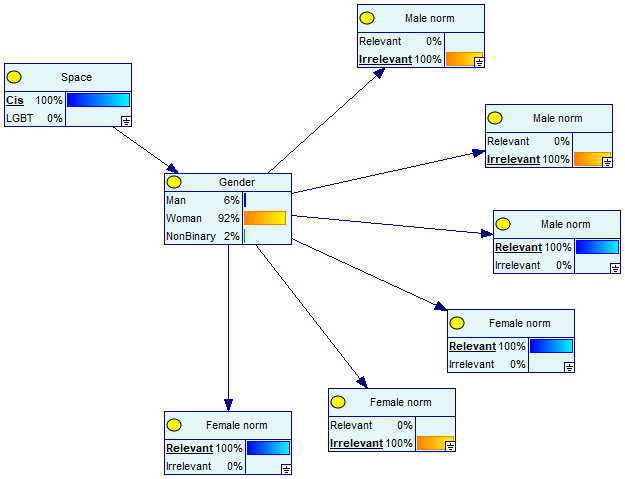 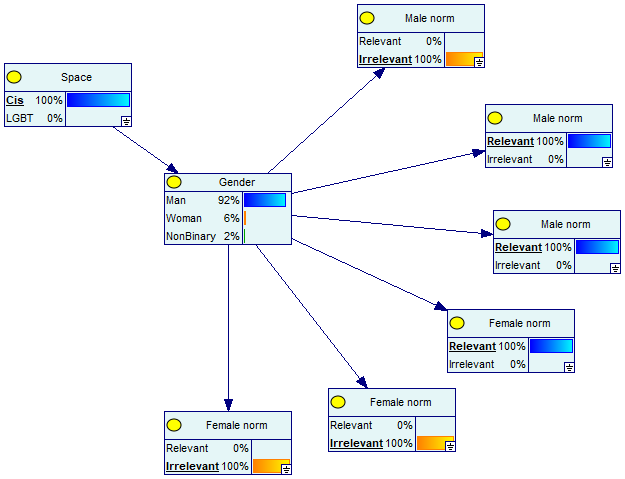 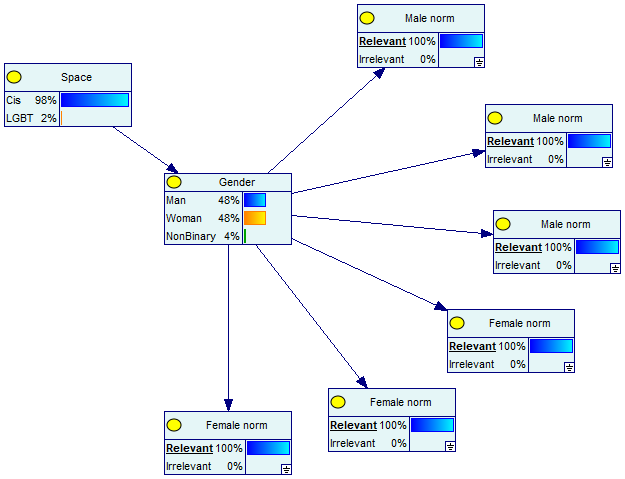 The probability of being nonbinary has gone up a little to 4%, but in this state there is most likely confusion about whether the gender is male or female since they both have the highest probability and that probability is the same.

Similarly, if all the norms are irrelevant, then the probability of nonbinary is 4%. Again, it is unlikely that you would infer that you are nonbinary. 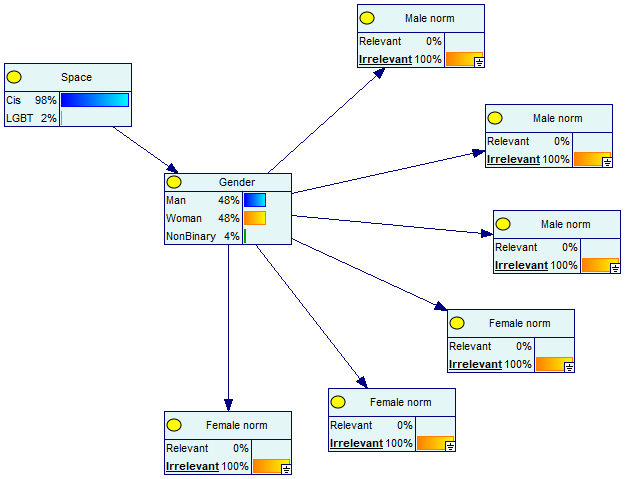 But increasing the prior probability of nonbinary gender, for instance through meeting more nonbinary people in LGBTQ+ spaces, now makes nonbinary the most likely gender. 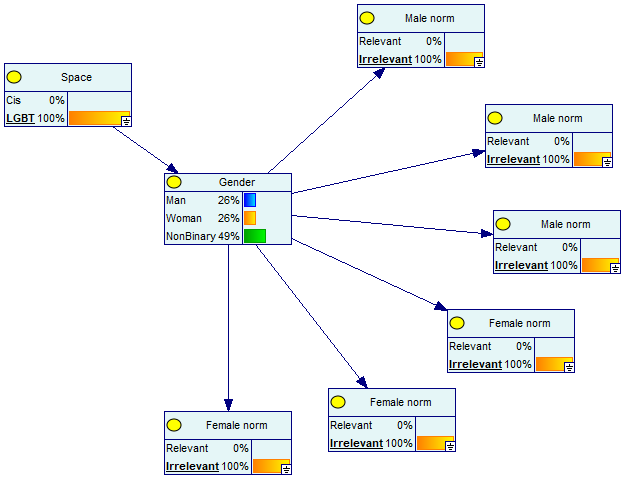 To emphasise again, there are many more varieties of gender identity here and an obvious thought might be that someone could be gender nonconforming but still a cis man or woman – especially if someone views gender as coupled to chromosomes/genitals. I think it’s also interesting how the underdetermination of scientific theories can apply to people’s ruminations about identity given how they feel and what other evidence they have.

The situation can also be fuzzier, e.g., where the difference between one of the binary genders and nonbinary is closer: 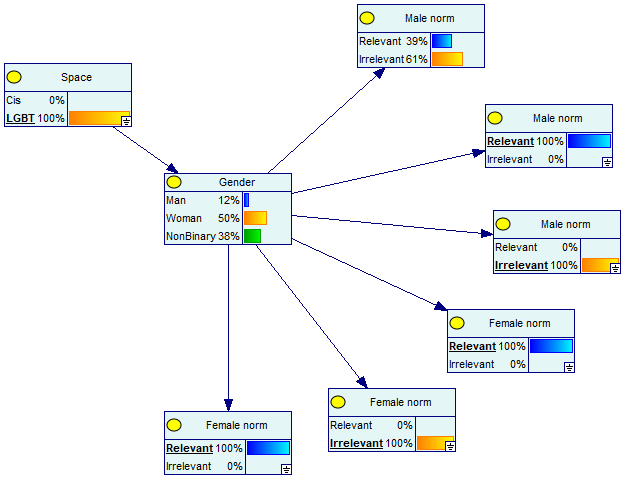 We undoubtedly don’t have conscious access to mental probabilities to two decimal places(!), so scenarios like these may feel equiprobable. 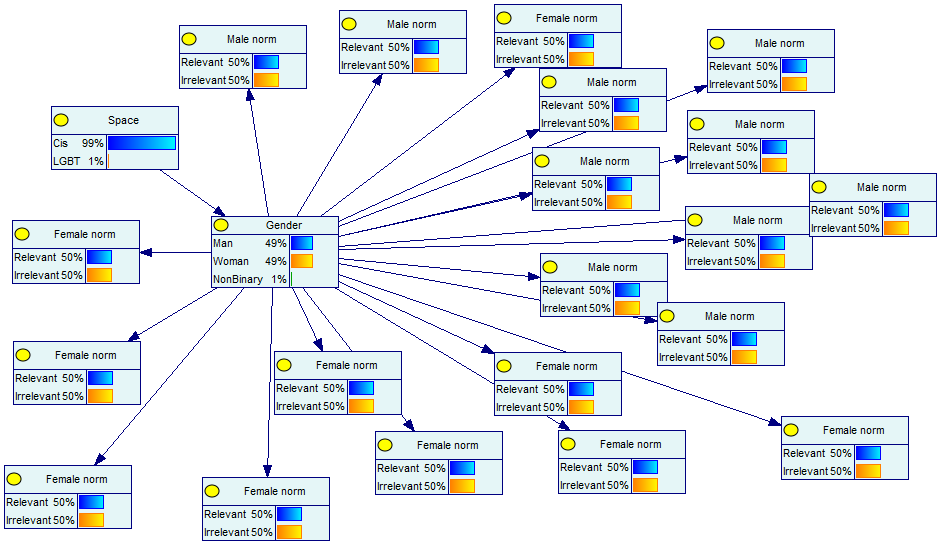 Everything works as before for men and women; however, something different now happens for nonbinary people. Suppose all the norms are experienced as irrelevant (it works the same for relevant): 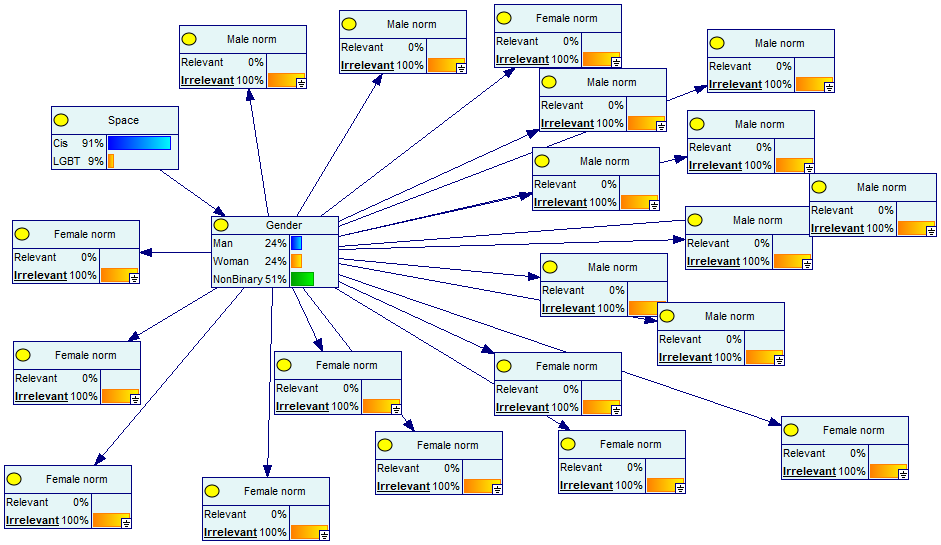 Now the most probable gender is nonbinary (though man and woman are still far from zero: 24%). 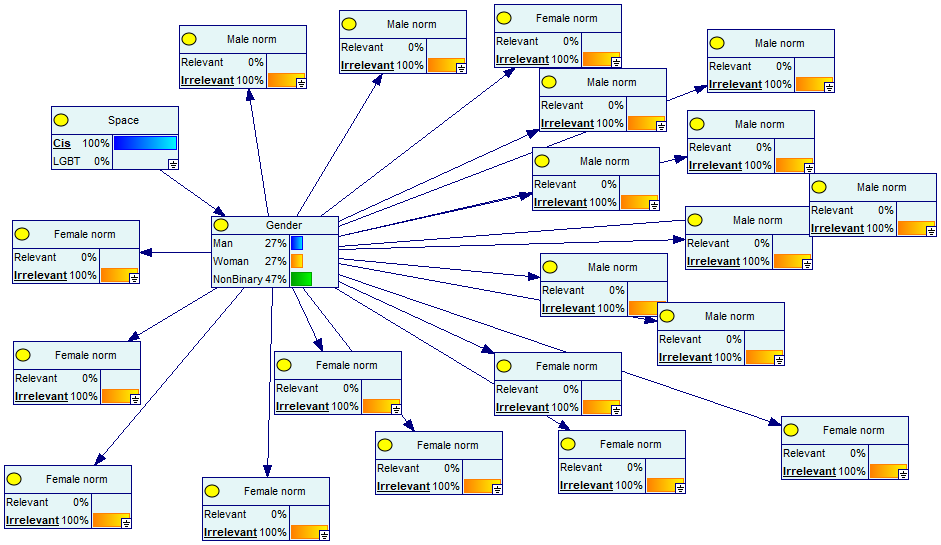 Finally, there’s another way to bump up the probability of nonbinary. Let’s go back to two gender norms, one male and one female. However, set the probabilities so that if you’re a woman, it’s 99.99% probable that the female norm will apply (and similar for men and male norms). Set it to 50-50 for nonbinary. Now we get a strong inference towards nonbinary if neither or both norms are relevant, even in cis spaces. 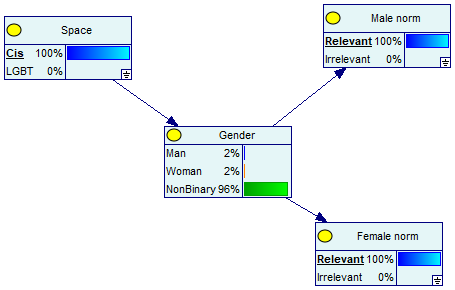