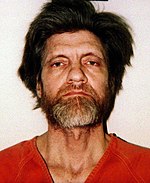 Thanks to (Dopamine) Rob I have (re)discovered Theodore J. Kaczynski, otherwise known as the Unabomber. I remember hearing about him on the news—back when he was arrested, I guess—but I hadn’t quite absorbed the interesting aspects of his biography. Aside from the posting of mail bombs, he was a brilliant mathematician. He graduated from Harvard, got a PhD from Michigan in geometric function theory, and then taught at Michigan for a few years, publishing several papers. I’ll let you follow the links to find out more; I just want to point to some sections of his political essay, Industrial Society and Its Future. In this essay he basically argues that modern society has made people miserable. He targets a few groups of people in particular—most amusing I found were his views on leftists and scientists.

He argues that leftists tend to have “low self-esteem, feelings of powerlessness, depressive tendencies, defeatism, guilt, self-hatred”, and that they are “overly socialised”, i.e., he argues, “to avoid feelings of guilt, they continually have to deceive themselves about their own motives and find moral explanations for feelings and actions that in reality have a non-moral origin”.

“The majority of people engage in a significant amount of naughty behavior. They lie, they commit petty thefts, they break traffic laws, they goof off at work, they hate someone, they say spiteful things or they use some underhanded trick to get ahead of the other guy. The oversocialized person cannot do these things, or if he does do them he generates in himself a sense of shame and self-hatred. The oversocialized person cannot even experience, without guilt, thoughts or feelings that are contrary to the accepted morality; he cannot think “unclean” thoughts. And socialization is not just a matter of morality; we are socialized to conform to many norms of behavior that do not fall under the heading of morality. Thus the oversocialized person is kept on a psychological leash and spends his life running on rails that society has laid down for him.”

On scientists, he has to say the following:

“With possible rare exceptions, their [scientists’] motive is neither curiosity nor a desire to benefit humanity but the need to go through the power process: to have a goal (a scientific problem to solve), to make an effort (research) and to attain the goal (solution of the problem). Science is a surrogate activity because scientists work mainly for the fulfillment they get out of the work itself. […] Other motives do play a role for many scientists. Money and status for example. Some scientists may be persons of the type who have an insatiable drive for status and this may provide much of the motivation for their work. No doubt the majority of scientists, like the majority of the general population, are more or less susceptible to advertising and marketing techniques and need money to satisfy their craving for goods and services…”