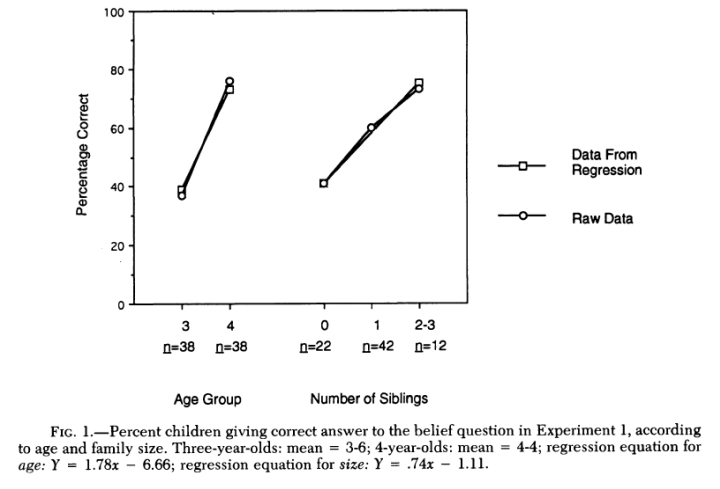 Why? After spending a few paragraphs carefully ruling out a bunch of interpretations, they settle on:

“… as Dunn and Dale (1984) suggest, children do engage more frequently in creative social role taking with siblings than with anybody else. And since a benefit can be gained from joint pretence with a younger as well as with an older sibling, pretend play is perhaps our best candidate for a cooperative activity which furthers the eventual understanding of false belief.”

2. Having a Montessori education also seems to help (Lillard & Else-Quest, 2006). 80% of 5 year olds at Montessori schools passed the test compared to 52% at control schools. (A lottery approach was used to select who ended up at the Montessori school.) I wonder could the key advantage be mixed-age classrooms?

Here’s Martin Doherty (2009) with a nice introduction to the empirical study of verbal false belief tasks:

“… According to Piaget’s theory, young children are profoundly egocentric: They are only able to consider things from their own point of view until they are about 7 years or older. What is now known as theory of mind was considered to emerge as part of a general escape from the confines of egocentrism in middle childhood. This diverted attention away from the surprisingly rapid development of the ability to understand others’ beliefs around the age of 4 years. Researchers driven by a powerful theory can sometimes miss the blindingly obvious.

“The change was brought about by an influential paper by two primatologists, David Premack and Guy Woodruff (1978): “Does the Chimpanzee Have a Theory of Mind?” This question of chimpanzee theory of mind remains hotly contested, but in a commentary on the paper, the philosopher Daniel Dennett suggested a way of determining the answer. He briefly sketched what has become known as the false belief task, taking as one example a Punch and Judy show. Children squeal with glee as Mr Punch prepares to throw a box over a cliff. Although they have seen Judy escape from the box while Punch’s back was turned, it is “obvious—obvious enough for four-year-old children—that Punch believes (falsely) that Judy is in the box” (Dennett, 1978, p. 569). Dennett’s reference to 4-year-olds is a notable piece of foresight. The method was put into developmental practice by Heinz Wimmer and Josef Perner soon after. They found that 4- to 5-year-old children can indeed predict the actions of someone with a false belief.”