The short instructional manifesto for relationship anarchy, by Andie Nordgren

“Relationship anarchy questions the idea that love is a limited resource that can only be real if restricted to a couple.”

“Don’t rank and compare people and relationships — cherish the individual and your connection to them. One person in your life does not need to be named primary for the relationship to be real. Each relationship is independent, and a relationship between autonomous individuals.”

“A great trick is the ‘fake it til’ you make it’ strategy — when you are feeling strong and inspired, think about how you would like to see yourself act.”

“Talk to and seek support from others who challenge norms […].”

“Sometimes people have so much going on inside themselves that there’s just no energy left to reach out and care for others. Create the kind of relationship where withdrawing is both supported and quickly forgiven.”

Relationship anarchy vs. nonhierarchical polyamory, by The Thinking Aro

“A relationship anarchist is not only someone who rejects hierarchy amongst partners but amongst romantic vs. nonromantic relationships. An RA could make a nonromantic friend their partner. Even without sex in the picture. An RA could take all of those romantically coded ‘partner’ behaviors — committed cohabitation, child rearing, financial interdependence, integration of partner into family of origin, etc — and perform them with a nonromantic/nonsexual partner instead of or in addition to a romantic and/or sexual partner.”

“[Relationship anarchy] rejects categories such as ‘couple’, ‘lover’, or ‘just friends’, in which the hegemonic relationships model compartmentalizes emotional bonds, and separates them according to their content: sexual, romantic, both of them, or neither of them. In this sense, RA rejects two aspects: on one hand, the meanings and contents that the hegemonic relationship hierarchy attributes to the personal bonds (what fits into each box: ‘friends’, ‘lovers’, ‘couple’, etc.); on the other hand, the distribution of social roles (prestige and structural function) that are assigned to each bond according to the category where they fit (the place in hegemonic social structure for a couple, friends, etc.).”

Why you should drop the ‘e’ in ethical non-monogamy, by Claire Louise Travers

“When we use the ethical prefix, we concede that non-monogamy is inherently unethical, and suggests that we have developed ways to make it morally neutral through self-improvement and hardwork. And this, is false.”

“I’m sure we would all hope that those engaged in any interpersonal relationship would strive for honesty, authenticity or equality; no matter their relationship structure or format. But one’s relationship dynamic or identity is not more or less valid by their ability to do this perfectly. Even within the non-monogamous communities, the use of ‘ethical’, holds with it a sense of entitlement or ‘higher than’ which is inescapable.”

“… though we don’t lay down rules or tell gay people how they should behave in bed or in their relationships, we do want them to question society’s blueprint for the couple. The blueprint says ‘we two against the world’, and that can be protective and comforting. But it can also be suffocating, leading to neurotic dependence and underlying hostility, the emotional dishonesty of staying in the comfy safety of the home and garden, the security and narrowness of the life built for two, with the secret guilt of fancying someone else while remaining in thrall to the idea that true love lasts a lifetime – as though there were a ration of relationships, and to want more than one were greedy. Not that sexual fidelity is necessarily wrong; what is wrong is the in-turned emotional exclusiveness of the couple which stunts the partners so they can no longer operate at all as independent beings in society. People need a variety of relationships in order to develop and grow, and to learn about other human beings.

“It is especially important for gay people to stop copying straight – we are the ones who have the best opportunities to create a new lifestyle and if we don’t, no one else will. Also, we need one another more than straight people do, because we are equals suffering under an insidious oppression from a society too primitive to come to terms with the freedom we represent. Singly, or isolated in couples, we are weak – the way society wants us to be. Society cannot put us down so easily if we fuse together. We have to get together, understand one another, live together.”

“… according to Nordgren, we should not treat the people in our lives as tokens of various types of relationships. We should strive to be attentive to the people that we care about as the unique human beings that they, in fact, are. Based on the particular facts that pertain to each given relationship, including the values, needs, and aspirations of those involved, we should “design [our] own commitments with the people around [us]” (2006).

“What might ‘designing our commitments’ in this sense involve? Consider the following Relationship Anarchist Smorgasbord (Fig 1), which sketches some of the central areas of relationship involvement as well as indicting some of the “design” options within each area: 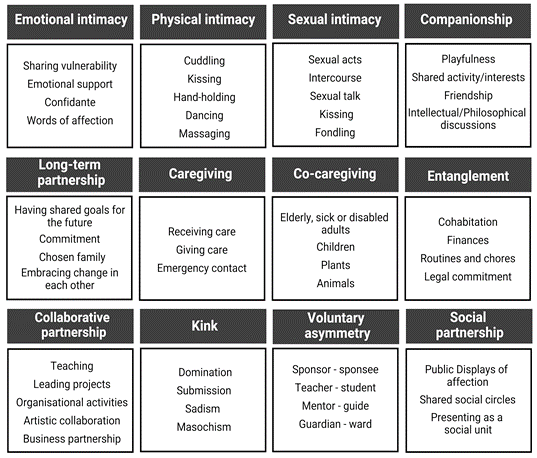 One key difference between polyam and RA is that the polycule of an RA person would include both platonic and romantic relationships. Though an RA person probably wouldn’t use the term “polycule”.

Interesting paper by Terri Conley and colleagues on consensual non-monogamy. Hope there are many studies to come to begin to fill in the gaps in data.

“… we currently have no evidence that sexual exclusivity invariably leads to greater intimacy and relationship satisfaction than CNM. Instead, some evidence suggests that consensual non-monogamy can be satisfying and functional for couples.”

“Although only a few studies have examined jealousy in CNM relationships, their results indicate that jealousy is more manageable in these relationships than in monogamous relationships (Bringle & Buunk, 1991; de Visser & McDonald, 2007) and is experienced less noxiously (Ritchie & Barker, 2006).”

“… large numbers of people who are in ostensibly monogamous relationships have been cheated on at some point, and moreover, cheated on in ways that put them at risk for STIs.”

“A quick glance at cultures around the world demonstrates that monogamous practices are actually non-normative rather than pervasive […]. Departures from monogamy are often perceived to be sinful, yet the Bible clearly condones non-monogamy in multiple instances…”

Conley, T. D., Ziegler, A., Moors, A. C., Matsick, J. L., & Valentine, B. (2012). A Critical Examination of Popular Assumptions About the Benefits and Outcomes of Monogamous Relationships. Personality and Social Psychology Review.