A psychoanalyst walks into a bar with a book on logic and set theory. He orders a whisky. And another. Twelve hours and a lock-in later, all he has to show for the evening is a throbbing headache and some indecipherable rubbish scrawled on a napkin.

That’s the only conceivable explanation for these diagrams from The Subversion of the Subject and the Dialectic of Desire in the Freudian Unconscious, by Jacques Lacan (published in the Écrits collection): 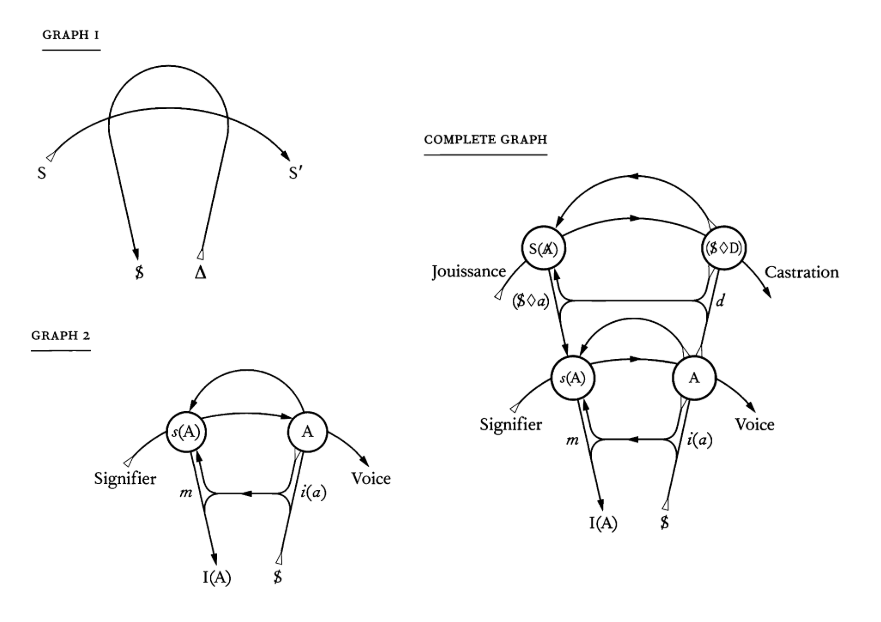 But, surely this notation means something? After all, Lacan is famous and academics across the world dedicate their lives to understanding his genius.

Also the notation f(x) is a function, f, applied to argument x – that’s recognisable from maths. So the I(A) and s(A) must mean something…?

To illustrate how function notation is usually used, consider the Fibonacci sequence, which pops up in all kinds of interesting places in nature. It is defined as follows:

The function notation “does something”. It provides a way of defining and referring to (here, mathematical) concepts. I claim that the brief explanation above would make some kind of sense to most people who can add two numbers together.

Less well-known, but appearing in university philosophy courses, is the lozenge symbol, ◊, which means “possible” in a particular kind of logic called modal logic. So if R stands for “it’s raining” then ◊R stands for “it’s possible that it’s raining”. It seems plausible that there is something meaningful here in Lacan’s use of the symbol too.

Here is Lacan, “explaining” his notation to his almost entirely non-mathematical readership:

Lacan doesn’t try to explain what the notation means; he doesn’t seem to want readers to understand. Maybe he is just too clever and if only we persevered we would get what he means. Elsewhere in the same text, Lacan uses arithmetic to argue that “the erectile organ can be equated with \(\sqrt{-1}\)”. I’m told this is a joke because \(\sqrt{-1}\) is an imaginary number. Maybe trainee psychoanalysts learn about complex numbers so get the joke. I doubt it though. Maybe all Lacanian discourse is dadaist performance – that at least would make some sense.

Alan Sokal and Jean Bricmont have written a book-length critique of Lacan’s maths and others’ similar use of natural science concepts. Having read lots of mathematical texts and seen how authors make an effort to introduce their notation, I think it’s entirely possible Lacan is a fraud, ◊(Lacan is a fraud). That might sound harsh, but forget how famous he is and just look at the pretentious rubbish he writes.

“When I was sixteen years old I built my own short-wave receiver and transmitter and became a ham radio operator. This bent towards electronics motivated me to enter the engineering school at Cornell University in 1931 with the intention of becoming an electrical engineer…”

“But those were depression years, and it seemed unlikely that I could make a sufficient livelihood as an electrical engineer.”

“… from early years I had been curious about people, how and why they were as they were. I was puzzled about myself as well, feeling myself to be something of an ‘outsider’ in school. As I learned later, this is one of the elements contributing to psychological-mindedness, a predisposition that is conducive to psychoanalytic inquiry.”

“I have always had one foot in hard science and one foot in literature and the humanities, and fortunately I don’t seem to have fallen between the two.”

“George Henry was carrying out a heavily funded research project on homosexuality. This opened a whole world to me that I had never known, especially the gay world, and I learned something about it, even getting to know some of its colloquial terms. Later Henry and his research assistant, who in retrospect I realize was homosexual, published several books on homosexuality from a descriptive point of view.”

“… I came to be in Boston, which I never left except for one year in neurology with Foster Kennedy (a colourful man, a Northern Ireland Orangeman of great sartorial splendour and the gift of marvellously eloquent, elegant speech) at Bellevue Hospital in New York, and my years in the military.”

“My initial exposure to the activities and ambience of the Hampstead Child Therapy Clinic [now the Anna Freud Centre] forty years ago, and my continued contact with it and with Anna Freud over many years, greatly influenced my identity as a psychoanalyst, both theoretically and clinically. Before my sabbatical in London in 1955, I had become interested not only in what nowadays seems to be called ‘cognitive developmental psychology’ and ‘attachment theory’, but also what might be termed ‘affect developmental psychology’.”

“[…] Dyadic thinking is not enough, because the family is at least a triad. It is necessary to remember that a system is not the sum of dyads or the sum of individuals-mother and father, son and mother, father and son, son and daughter, daughter and mother. It is necessary to observe all systems functioning at the same moment. So psychoanalysis continues in the Aristotelian way of thinking and has no way of looking at other concepts, such as coalition of two people against a third person and so on; it remains an intrapsychic or dyadic model. It is necessary to go beyond even the triad.”

“1961 and 1962 were momentous years for Aaron T. Beck. They were the years he made a decisive break with his psychoanalytic past. He closed down his large psychoanalytic research project on depression, put to rest his application for membership in the American Psychoanalytic Association that had been rejected twice, and turned his back on the cornerstone of psychoanalytic theory, the unconscious. He took a sabbatical from the psychiatry department at the University of Pennsylvania following a destructive department-wide battle over the future of psychoanalysis in psychiatry.

But then… here’s a letter Beck wrote to John Bowlby in 1981:

“It might be a point of curiosity therefore for you to know that my psychiatric training was completely and exclusively psychoanalytic… I would consider my theoretical work as derivative from ego psychology rather than from cognitive psychology or learning theory. At the present time in fact I am trying to reformulate many of the basic psychoanalytic concepts into cognitive terms (Beck, A. T., personal collection, July 29, 1981).”

“Psychoanalysis is very different [from psychology], and very peculiar. One might even suggest […] that the structure of psychoanalytic history is much more like the history of a religious sect […]. Like a religion, there was a founding father who had a revelation (the existence of the subconscious); he struggled to have the truth of this revelation recognised by a hostile world, and gradually gathered around him a group of followers. […] A canon of set (scared) texts emerged, mostly penned by (or attributed to) the founder and studied continuously down the generations.”

In an introduction to psychodynamic ideas, Jonathan Shedler writes (p. 42):

“If behavior were unavoidably determined, there would be no reason to practice psychoanalytic therapy or, for that matter, any form of therapy.”

Although I’m not sure about free will, I don’t think this is a necessary consequence of having no free will. And it’s important that there is a reason for clients who reject free will.

Suppose we have no free will. Two claims are difficult to refute:

(1) We experience stuff, some of it fun, some of it not. The phenomenological feeling which goes along for the ride doesn’t seem to care about free will. Related to this, I think it’s interesting that we still go to the cinema and read books even though we know the ending has already been decided: we seem to derive great pleasure from finding out what happens next. “You should go on living – if only to satisfy your curiosity” – Yiddish proverb.

So, therapy may just be another link in the big causal network in the universe. Hopefully it’s more likely to improve someone’s life than other links, however unavoidable and predetermined going to see the therapist and its consequences might be.

The British are notoriously distrustful of theory. Newton was even, famously, distrustful of “hypotheses.” Theory is continental. We think of it as Germanic, and heavy. We think of Hegel and Heidegger. Brits who get entangled in it, like Samuel Taylor Coleridge or R. D. Laing, become incoherent substance abusers with marital problems. Psychoanalysis is full of theory. It has to be, because it is so distrustful of the surface. It could still choose to use the minimum necessary, but it does the opposite. It effervesces with theory, so infectiously that books of theory now bombard us from Paris, New Haven, Indiana, it sometimes seems from everywhere where there is a feminist modern-language academic. This weight of theory is a major reason why experimental psychologists, who are the most deeply British-Empiricist culture that there is, cannot get on with psychoanalysis. How could they possibly? How could people whose habit of mind is to ask of every statement that might have empirical content whether (1) it is statistically significant, and (2), more interestingly, whether there might not be another simpler explanation, possibly stomach these outpourings of prose, of sentence upon sentence of uncertain epistemological status?

Whittle, P. (1999). Experimental Psychology and Psychoanalysis: What We Can Learn from a Century of Misunderstanding. Neuropsychoanalysis, 1, 233-245.

“Psychoanalytic practice has limitations as a form of research. A physician practising internal medicine learns from clinical observations but is not under the illusion of being engaged in research. The physician’s work, we hope (if we are the patient, that is), is however influenced by the results of research, and his or her reasoning will have been disciplined by scientific training. The problem of using clinical experience as research is well known to be one of induction. Mostly, we tend to confirm our theory-based expectations from our patient’s material. Our memory for material is biased, even our perception is impure. We cannot be pre-Kantian objective observers. Our own discovery of the pervasiveness of countertransference denies us this possibility, even in principle.

“In a paper that I wrote, longer ago than I care to remember (Fonagy, 1982), I put forward the argument that research studies could not and should not be used to test psychoanalytic ideas. If a clinical observation cannot be replicated in the laboratory, there are a host of good reasons why this might be so. Rather, systematic observations could be used to inform us about the psychological processes underpinning clinical phenomena…”

—Peter Fonagy, Grasping the Nettle: or Why Psychoanalytic Research is such an Irritant. Paper presented at the Annual Research Lecture of The British Psychoanalytical Society on 1st March, 2000.