“… romantic love is a syndrome because it is an arational, projected attitude with a plethora of symptoms that vary across cultures and individuals. Some core symptoms have been identified by Tennov’s concept of limerence, including obsessive thinking and idealization.”

“… all norms applicable to romantic love are extrinsic rather than intrinsic to it because romantic love is arational. For this reason, it is up to the lovers to accept, reject, and modify the norms that govern their loves.”

From In the Jungle of Cities:

Love, the warmth of bodies in contact, is the only mercy shown to us in the darkness. But the only union is that of the organs, and it can’t bridge over the cleavage made by speech. Yet they unite in order to produce beings to stand by them in their hopeless isolation. And the generations look coldly into each other’s eyes. If you cram a ship full to bursting with human bodies, they all freeze with loneliness.

EKART: There’s a kind of sky in my head, very green and vast, where my thoughts drift like featherweight clouds in the wind. They’re completely undecided in their course. All that’s inside me.

BAAL: It’s delirium. You’re an alcoholic. You see, it gets you in the end.

EKART: When I’m delirious I can feel it by my face.

BAAL: Your face has room for the four winds. Concave! [He looks at him.] You haven’t a face. You’re nothing. You’re transparent.

BAAL: Nobody knows your history. Why don’t you ever talk about yourself?

EKART: I shan’t ever have one. Who’s that outside?

BAAL: You’ve got a good ear! There’s something in you that you hide. You’re a bad man, like me, a devil. But one day you’ll see rats. Then you’ll be a good man again.

“Life, love and romance are all about surprise: the surprise of an unexpected bouquet of flowers, a mysterious stranger met by chance at a party, the unannounced return of an old lover at your doorstep, the confusion of finding the unknown side of an old friend or acquaintance who becomes your partner. The freshness of a relationship kept new even after years.

“The logical world … seems to be a world of no surprise, no serendipity, no romance. Axioms generate propositions, one deduction blindly follows another. The game is over almost as soon as it is begun. Where is the romance in that? No chance for the heart to overrule the head, contradiction to conquer cogitation, desperation and devotion to deliver you from derivation.

“In the 1920s, a mathematician named Goedel proved that in any consistent logical system [the result is a bit weaker than that… AF], there will always be statements whose truth or falsity can’t be proved by the simple mechanical rules of logic. Even if these “undecidable” statements are appended to the list of axioms, as long as this enlarged system remains consistent, there will still be other statements whose proof or refutation lies outside the power of formal reasoning.

“The unknowable and the unpredictable is embedded in even the most simple of things. Romantically speaking, I like to think of this as saying that if we have a guarantee of truth, and thus the possibility of honesty, then from this we must necessarily have surprise, even mystery—and maybe then, just maybe, with a little bit of luck, we must have love. Q.E.D.”

From Logic is the language of love by Daniel Rockmore

‘I got married in 1970. My wife is an artist, and I learned a lot from her; the fact that I can talk about things, for instance. I remember I was going out with her, before we were married, and we were walking from one part of the university to another part. My objective was to get from A to B, she wanted to stop and look at the moon, because it looked very nice. And I thought: “What the hell would I want to look at the moon for, when I want to go to B?” Now, of course, I will look at the moon at all times with her.’

(From an interview with “Ta!”) My reluctance to look at the lunar eclipse suggests I need to meet an artist—pronto 🙂 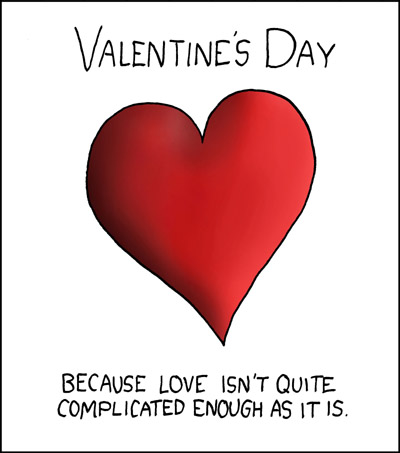