The ionosphere is a series of layers of the atmosphere, at heights between 50 and 1000 km, that are ionised by solar radiation. One of the things amateur radio operators do is experiment with how to use the ionosphere to bend the path of their radio waves and see where signals end up.

Given how the ionosphere is formed, it is dependent on how much radiation the sun is flinging at it. This is partly-driven by what bit of earth is currently pointing at the sun, so time of day is an important factor. There is an 11-year cycle of solar activity which has an enormous influence on ionisation. We’re currently on our way to a solar maximum next year, meaning that the ionosphere is particularly good at bending radio waves. The radio frequency used also influences how high a radio wave can travel before it is refracted by the ionosphere. Some frequencies pass straight through into space whereas others are easily absorbed; the trick is to choose the right frequency for season and time of day so that the wave is bent back to earth.

Digital modes of transmission are increasingly popular. They sound like robotic beeps and are produced and decoded by free software produced in the amateur radio community. These modes are used to explore different ways to encode information so that even if parts of a message are lost in the noise en route, there are ways to digitally reconstruct it at the receiving side.

One digital approach is called WSPR (pronounced “whisper”), which stands for “Weak Signal Propagation Reporter”. This is specifically designed for low power transmission, and transmitters and receivers are automatically controlled by computer. One challenge is how far you can get a signal with an absurdly low power transmitter and amateur antenna. All signal reports around the world are automatically logged on a web-based database, so it’s possible to analyse how far signals have travelled and what factors affect this.

I had a play with WSPR data last year to see if I could find a way to visualise the impact of time of day and radio frequency on how far a signal travels. See my record of attempts, including many that turned out to be useless.

My favourite is below, showing reports of signals sent from an area around London. The colour of data points indicates how far a signal has travelled. The x-axis is date and time and y-axis is signal strength. One of the striking effects is how transmission over short distances is unaffected by time of day since the waves travel by line of sight (look for the horizontal lines). For longer distances, different parts of the world fade in and fade out as the earth spins and the sun’s effect on the ionosphere waxes and wanes. The three different graphs show results for three different frequencies. 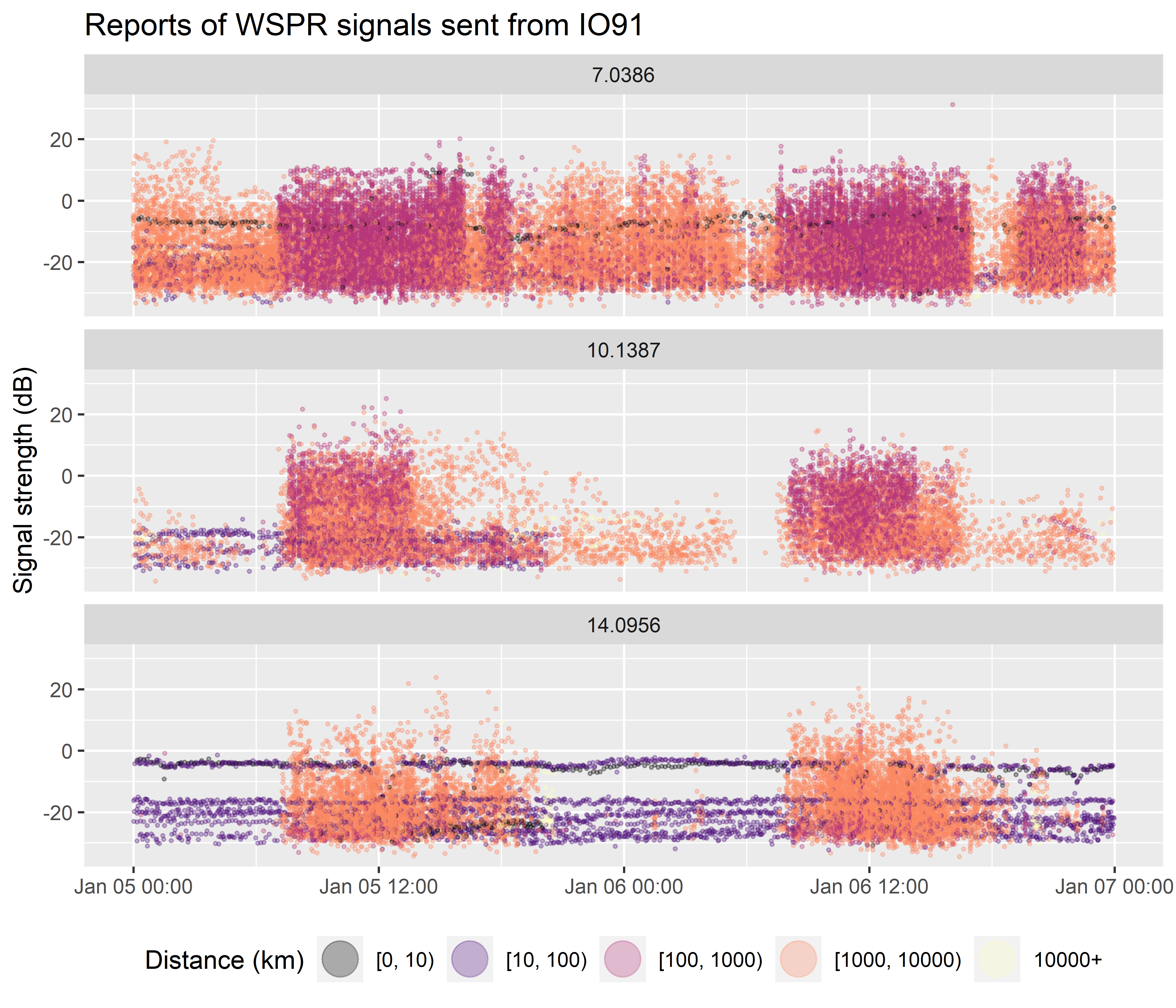 Venture over to this repo for a collection of examples showing how to query the WsprDaemon Timescale Database using R and SQL and visualise the results using the tidyverse. 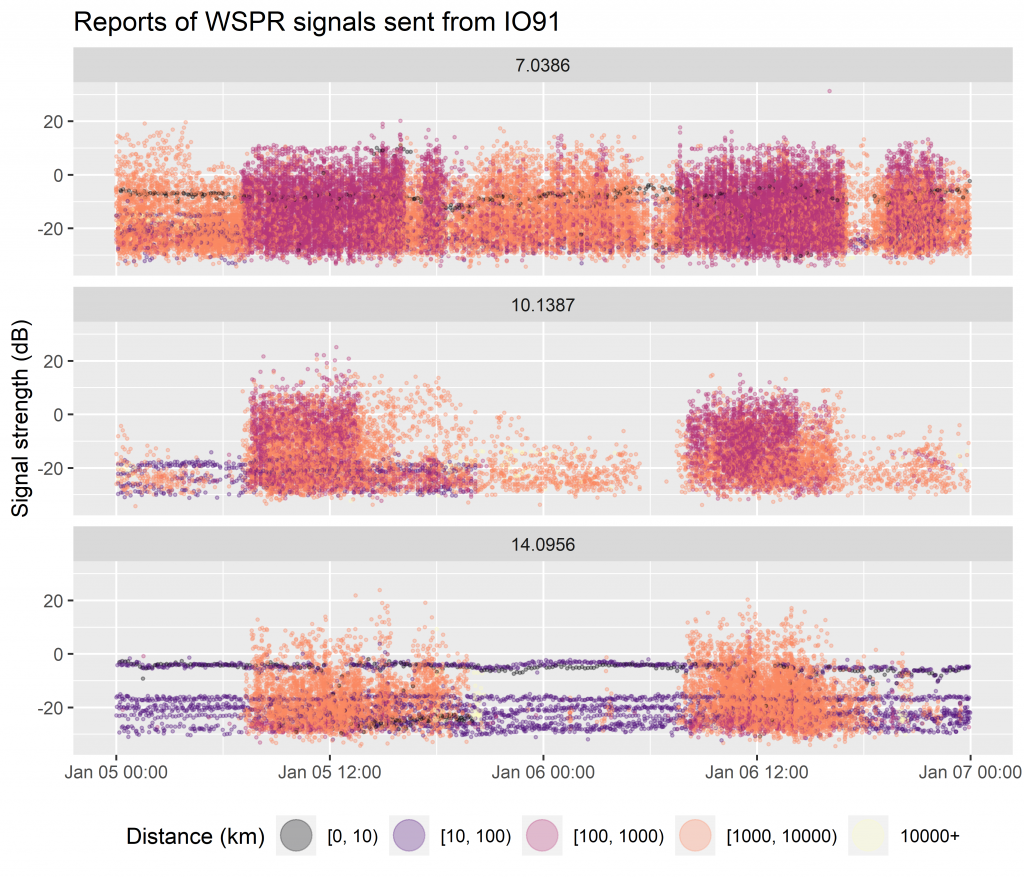 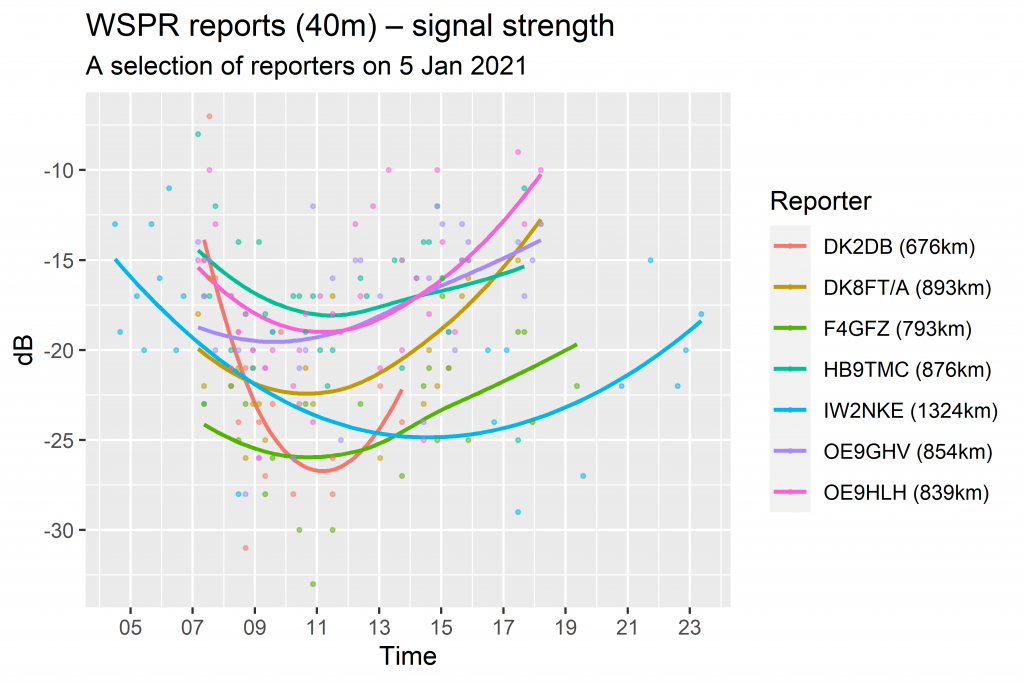 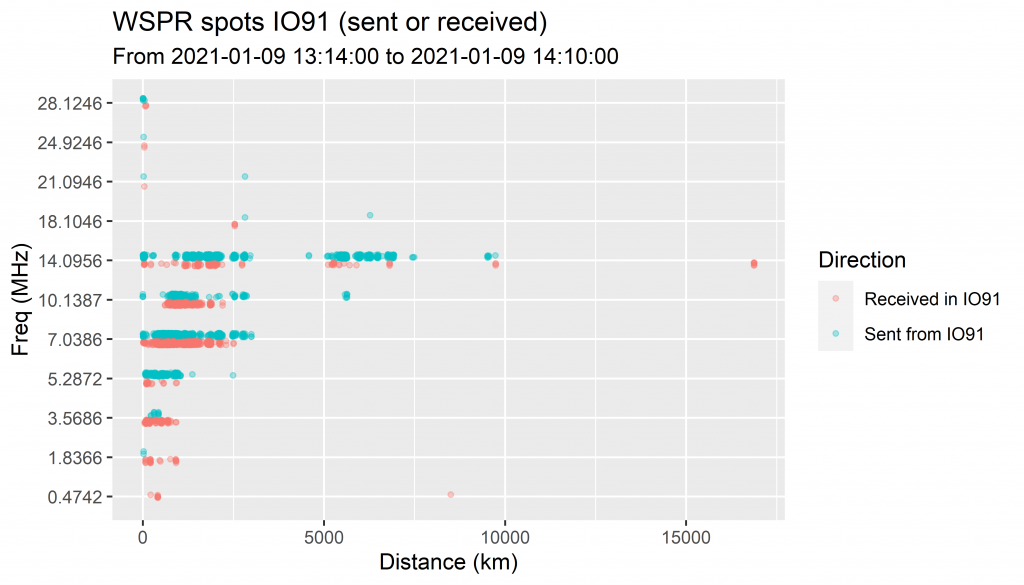 I’ve just started experimenting with digital models again on ham radio. Finally, around 11pm, got across the Atlantic on WSPR (technically, MEPT_JT; Manned Experimental Propagation Transmission plus its creator Joe Taylor’s initials) with ~3W and a loop antenna inside a north London flat. 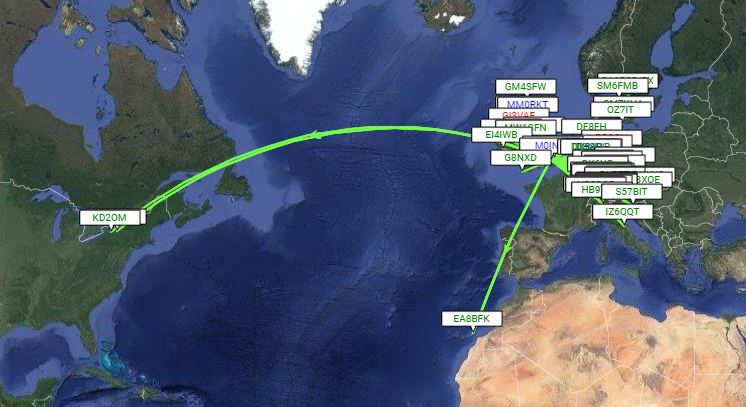 Shortly after, made it across with FT8… 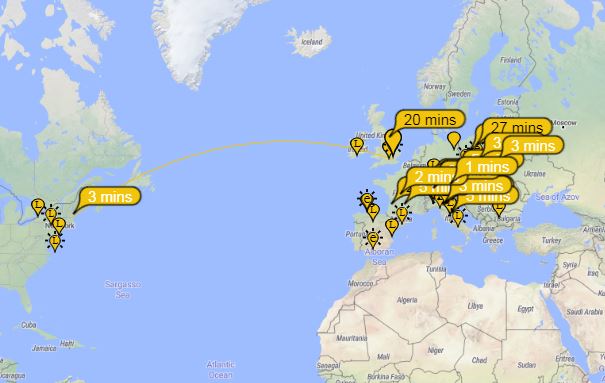 … but no transatlantic QSO in this flat yet.

I’m using a Yaesu FT-818, WonderWand Wonder Loop 750, and a SignaLink USB interface to connect the 818 to my laptop running WSJT-X.

I’ve been into radio since I was knee-high, listening to pirate stations like Kiss 103.7 FM in Northern Ireland (when all my favourite stations were shut down I was a very sad 7 year old indeed) and dabbling in Short Wave Listening (I got some “QSL” postcards, e.g., from Russia and the Czech Republic, confirming signal reports). I first transmitted when I was a teenager using CB radio and there’s still the base of a 5/8 wave antenna rusted onto the side of my parents’ house. I also worked for a bit on an FM broadcast student radio station.

CB radio licences only allow transmitting on low power and on frequencies where relatively short range line-of-sight communication is the norm. Amateur (or “ham”) radio operators can use a broader range of frequencies, some of which allow radio waves to be reflected by the ionosphere and so travel long distances. They’re also allowed to use higher power and much more flexible operating modes (examples below). I’d wanted to get a ham licence when I was a teenager, but this requires sitting exams, and I was already doing enough of those!

I forgot all about ham radio until last year, when a friend of a friend featured on a blog by someone “photographing oddballs whom he found eccentrically wandering around London”. Here’s Oliver (M6ODP), radio ham — he’d been walking along the Thames with a handheld radio.

Ham radio still sounded like fun and I’d overcome my hatred of exams, so I Googled around and found that Loughton & Epping Forest Amateur Radio Society (LEFARS) were running weekend courses. I ordered the books, practised a spot of soldering and sums, and passed the Foundation exam on 21 Sept 2014, the Intermediate on 25 Oct 2014, and the Advanced on 8 Dec 2014. Since December, I’ve had a full licence, callsign M0INF.

Before I got my first radio I played with Echolink which is a bit like Skype for radio hams, with the additional feature of allowing remote connections to radio transceivers (combined transmitters and receivers) over the Internet. For example you can connect to a transceiver in the US, listen on whatever radio frequency it’s listening to and also transmit, so anyone using a radio nearby can chat with you. Commonly these are repeaters, transceivers on hilltops and high buildings which listen to signals on one frequency and re-transmit them on another, allowing conversations over longer distances.

My first ham connect was with OE1OMA on 4 Oct 2014. She was in Vienna, using the local OE1XUU repeater on a handheld radio. I dropped in via Echolink on my PC in London.

I got a handheld radio, the Yaesu FT-60R, which covers the 70cm and 2m bands used for local chat between hams (and lots of other things, such as talking to the International Space Station, but I haven’t got there yet…). I started using the GB3HR (Harrow) and GB3NS (Caterham) repeaters; more recently, GB3LW (London Sound Bank) has come (back) online, and gives great coverage around central London. Conversations vary from geeky talk about… wait for it… ham radio… to general chat with people in and around London who are, e.g., walking their dog across a hill, on a smoking break from a night shift, or driving home from the shops.

Radio hams tend to be most interested in international communication, for example on the 20m HF band. Done well, this requires large antennas and high power. I rent a flat in London and haven’t yet found a way to install an outdoor antenna which wouldn’t result in me being evicted. However, I discovered the WonderLoop range of antennas which work indoors on low power. There are several YouTube videos of people using them to make long-distance contacts so I thought I’d give one a go. I got a Yaesu FT-450D to transmit through it.

Surprisingly, the loop works — when conditions are good and when the other end has a decent antenna! My first contact was on 11 January to EC7WA in Spain on SSB. Since then I have spoken to people as far away as Russia and, thanks to particularly good conditions, even the US. I’m mentioned briefly in an American Radio Rely League (ARRL) update.

Recently I got a SignaLink interface, a device for connecting my radio to my PC so I can send and receive data. There are many different ways to encode data so that a ham, similarly equipped with radio and PC, can decode it at the other end (hear example recordings of how they sound). So far, I’ve experimented with PSK31 and WSPR (pronounced “whisper”). PSK31 looks a bit like text messaging, with recognised abbreviations of common expressions related to calling and acknowledging message receipt. The furthest I’ve reached is Russia. WSPR is essentially lots of computers saying “Hello there!” to each other via the radio waves in a very robust way, so the signals tend to be detectable even using low power over long distances. If someone receives your message then it’s logged automatically on a central server so you can leave WSPR running overnight and see in the morning how far you reached. My furthest report was from New Zealand. Given my indoor antenna I was very surprised!