I haven’t read this working paper yet – just struck by this dataset:

“We leverage a rich new source of ‘digital trace’ data to provide a detailed empirical perspective on how social networks influence the decision to migrate. These data capture the entire universe of mobile phone activity in Rwanda over a five-year period. Each of roughly one million individuals is uniquely identified throughout the dataset, and every time they make or receive a phone call, we observe their approximate location, as well as the identity of the person they are talking to. From these data, we can reconstruct each subscriber’s 5-year migration trajectory, as well as a detailed picture of their social network before and after migration 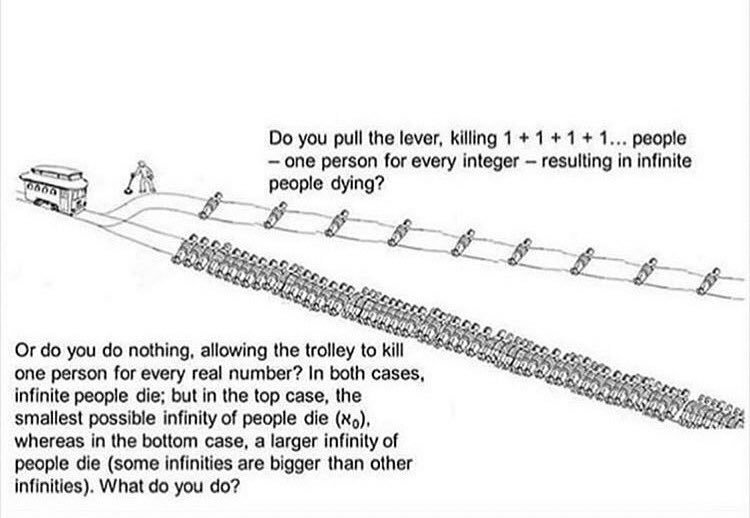 My first thought on seeing this was, aha, finally a chance to apply Cantor’s diagonal argument to something useful: to solve the problem of whether or not to pull the lever.

Let’s start with an easier version. Suppose the segment of the lower rail where people are tied is bounded in length to a whisker short of 100 meters. Each person is tied at a position on that segment somewhere greater than or equal to 0 metres and less than 100 metres from the beginning of the segment. Another way to write that range of positions is [0,100).

Number the people 0, 1, 2, 3, … starting at the end of the track from which the train is approaching. Now let’s work along that infinite philosophically imagined mound of people and construct a position on the track as follows from where they are lying along the rail (in metres). You have a very precise measuring tape.

Here are some examples of positions:

From these, we would calculate the following:

Think about what we have done here. We have worked along all the people and calculated a new position in [0,100) where nobody is tied to the track. This is because the new position differs from each existing position on at least one digit, by construction. But we are supposed to have one person at all infinitely many real number positions on the track. Here we have found a gap, a real number that isn’t being used.

We could add someone else at 99.4696… m. But if we did that, we could just follow the procedure above again to find another gap.

It follows that our original assumption is false: it is not possible to stack infinitely many people along infinitely many real-numbered positions along an almost 100 metre long segment of track. Assuming we could has led to a contradiction.

So it is not possible to tie heaps of people to a track so that there are as many people as there are real numbers. People are rather discrete, countable, beings, and I could have stopped at “Number the people 0, 1, 2, 3, …”.

It turns out that the two tracks must have the same countably infinite number of people, so it doesn’t matter whether you pull the lever.